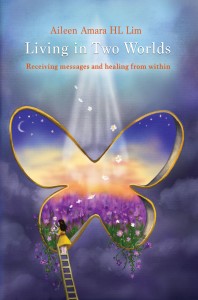 Living in Two Worlds: Receiving messages and healing from within is now available in Paperback and Kindle eBook at Amazon.com

Brought up in a conservative Malaysian society, Aileen finally reveals how she has lived in two worlds most of her life, the external and the spiritual one within. She describes how, as a young woman, she was thrown into dark confusion after dabbling with the ouija board, and miraculously received healing for her deep-seated fears from invisible healers. Also, through her gift of receiving spiritual messages, she found herself interacting with ascended great gurus or masters and experiencing contact with deceased loved ones.

True to the mystical nature of her book, we discover later the identity of her rescuers. Was it Jesus whom she saw in a vision? For the wary, she explains how to discriminate between real and false messages and whether there are ghosts and evil spirits.

In gratitude for the help she received, she shares her experience of how we can facilitate our own self-healing, through meditation and the flowers in nature. She also illustrates how God actually works miracles for us in everyday life as He tries to help us and how each of us can cultivate closeness with Him. Drawing on both Christianity and yoga, hers is an inspirational testimony on how, with divine help, we can transform ourselves from being filled with anxiety and fear to a state of calm happiness, through perseverance and faith.

Turmeric and fennel are aromatic herbs, full of flavour, and can be used together to spice any dishes, besides being health-giving.

The simple spice mixture in the recipes below makes a very good base for any dish.

a. Turmeric and fennel pasta 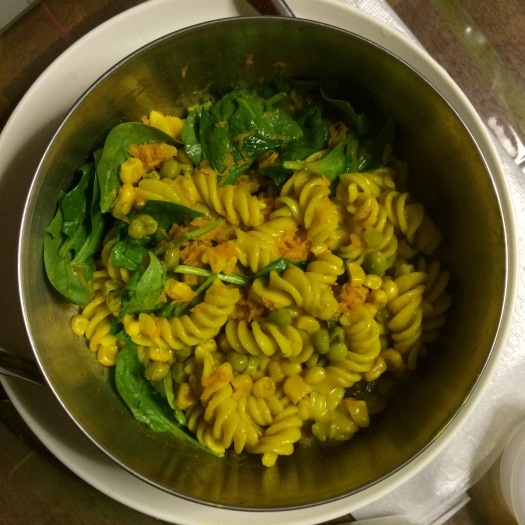 Pressure cooker filled with water to cover the stand

Water, preferably filtered, to cover 1/3 of the bowl

A small amount of peas and corn (fresh, frozen or freeze-dried)

Put the water in the bowl

Next add the spices, stir

Then add the fusilli pasta

After that, add the peas and corn

Ensure that the water covers the top of the pasta. If not, just add a little more to cover the top. The pasta should spread out flat and closely in the bowl.

Place the bowl on the stand, over water, in the pressure cooker. Turn on the heat.

Once the steam hisses out loudly, time 2-3 mins of cooking. I like to use fusilli pasta but you can use penne too, which takes about 2 mins. Any smaller pasta means that the cooking time needs to be adjusted to less. (1 min for small pasta shells).

Turn off the heat, and allow the pressure to release by itself (approximately 20 minutes).

Then take out the bowl of pasta.

Stir in the grated carrot and spinach leaves.

Serve straight away so the pasta will not get bloated absorbing the sauce.

You could sprinkle your favourite seeds on top, and add a few walnuts for extra protein.

*Turmeric must be combined with black pepper for full benefits. It is not easy to absorb; black pepper boosts absorption.

* Ingredients in black pepper (piperine) and turmeric (curcumin) have shown benefits for protection against cognitive impairment and improvement of memory in Alzheimer’s disease, inhibiting the growth of peptic ulcer, and also in fighting cancer.

b. Turmeric and fennel potato soup

Equal amounts of fennel and turmeric plus salt to taste will make a very good soup. You won’t believe how good and fragrant. Potato in plain soup alone already has a delicious flavour.

Pressure cooker filled with water to cover the stand

Water, preferably filtered, to cover 1/3 of the bowl (increase if you like more soup)

A little peas and corn

Cilantro for garnish – fresh, roughly chopped (dried may be used though not as fragrant)

Put the water in the bowl

Next add the spices, stir

After that, add the peas and corn

The water should cover the potatoes, but add more if preferred, without the soup boiling over when cooking.

Place the bowl on the stand, over water, in the pressure cooker. Turn on the heat.

Once the steam hisses out loudly, time between 1-2 minutes of cooking.

Then turn off the heat, leave the dish in the cooker until the steam releases (approximately 20 minutes).
Serve with a garnish of chopped cilantro. (You may use parsley or any favourite garnish.)

(If you are a pepper lover, for that extra taste and flavour, you could add a sprinkling of white pepper to your soup.)

* Cilantro is rich in vitamins and minerals, especially Vitamins A, K, C, manganese and potassium. It is known to help cleanse the body of toxic metals by aiding detoxification.

Why use a bowl on a stand sitting in water in the pressure cooker?

The advantage of cooking in a bowl is the ready-to-serve convenience.

Also, rice can be cooked traditionally in this way, absorbing only the water it needs to fluff up, whereas it would burn cooked directly in the pressure cooker – unless it is cooked in plenty of water and then strained.

Using a bowl definitely saves cleaning a heavy pot every time you cook – and it remains nice and new!

Cooking in this way saves time – and thus energy-saving in more ways than one.

An alternative to pressure cooking is steaming, which is the principle behind my preferred method using the pressure cooker, but it takes a longer time.

Baking is another alternative for the pressure-cooked recipes but it also takes a longer time. 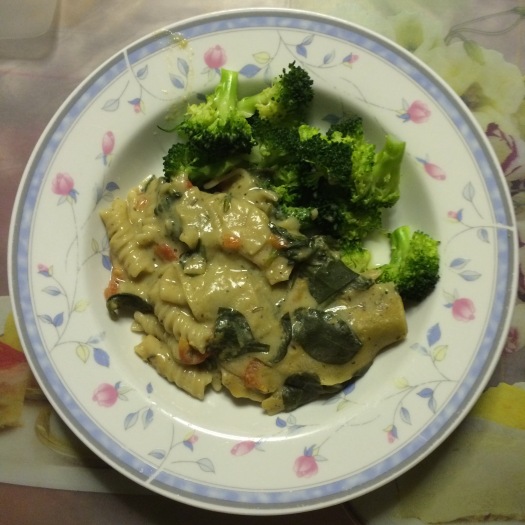 This quick lasagna can be steamed or baked as well but I use the pressure cooker – fast, energy-saving and fun.

FAST-TO-PREPARE METHOD (For a person in a hurry)

No need to layer the ingredients – cook everything in a saucepan and ladle the sauce into the bowl, with lasagna sheets in between.

A leisurely preparation time for the sauce with ingredients is about 30 mins.

Measure out the soy milk and pour into a saucepan

Then bring the soy milk to a boil, stirring all the time

Stir in the garbanzo paste till the soy milk thickens

Stir in in the herbs and the capsicum

Turn off the flame/heat

Stir in the spinach leaves

Break the lasagna sheets to fit the bowl

NOW put a layer of the sauce at the bottom of the bowl, next place a layer of lasagna sheets on top, followed by more sauce above, and so on.

You can layer 5 lasagna sheets, or more if you prefer.

From the moment the steam of the pressure cooker hisses out loudly, time about 7 minutes to cook. Then turn off the flame/heat and let the lasagna sit in the cooker until the pressure is released.

The sauce with ingredients between the layers of sheets does not have as much body as with the regular lasagna when you layer the ingredients separately.

BUT this healthy gluten-free lasagna is still as tasty! And saves time.

A lacto vegetarian can use cow’s milk instead of soy milk and can add layers of cheese on top of the lasagna sheets.

You can use powdered soy milk and mix with water to 1 1/4 cup. (I use the sugar-free ‘Unisoy’ brand.)

You can add more ground oregano and herb mixture if you prefer.

If you use another type of thickener, see that the consistency of the sauce is not too thick.

If you see little spaces without any lasagna sheet, simply add in broken pieces to cover them.

If you own a big pressure cooker, you can use a rectangular stainless steel dish to more easily fit in the lasagna sheets. 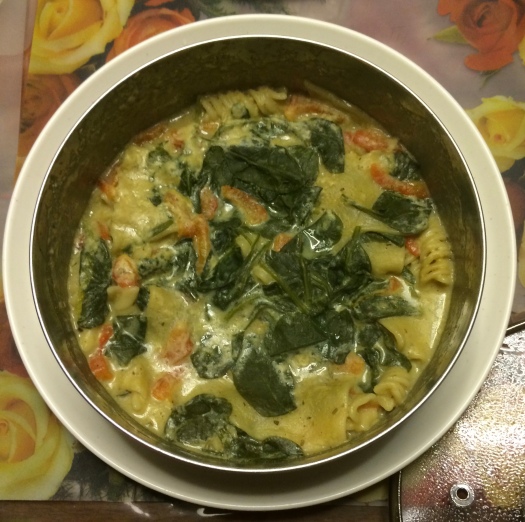 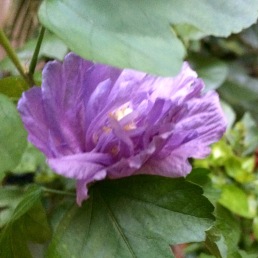 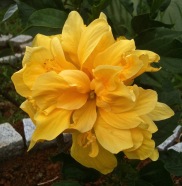 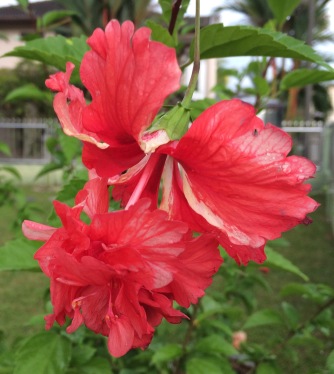 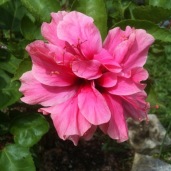 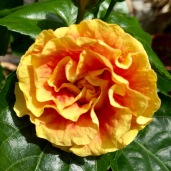 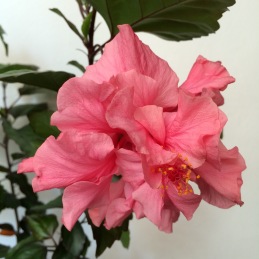 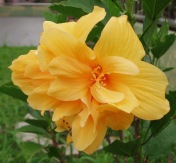 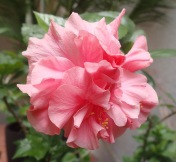 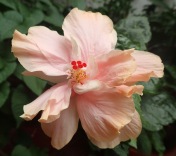 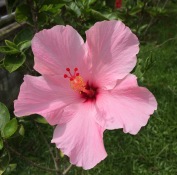 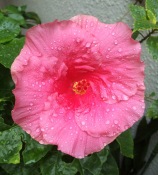 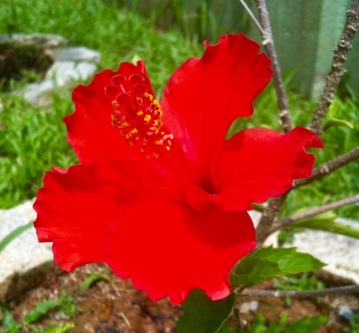 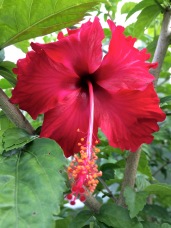 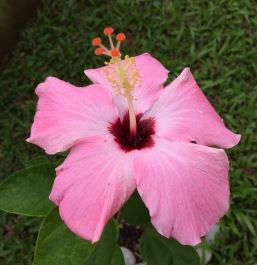 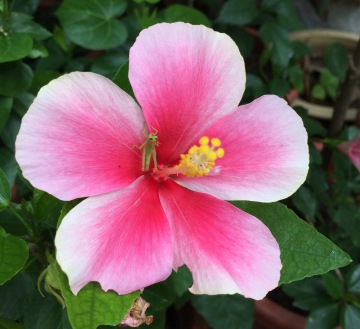 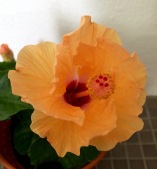 Simon Best: Caduceus, UK’s authoritative healing/spiritual/health magazine – issue 82 is downloadable for free online and has a beautiful article on the geometry of flowers. Issue 97, newly out, focuses on cancer therapies.

Dr Peter Mack: learn about the numerous healing books of a highly regarded practitioner and surgeon.